Gigi De Lana: A Star in the Making 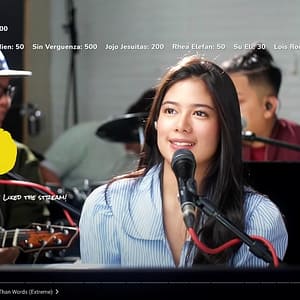 A new face has made rounds on the Internet these days and she is another face of Filipino talent and capabilities.

Gigi de Lana is a rising Filipina YouTube singer and former contestant of Its Showtime’s “Tawag ng Tanghalan”. Her fame recently sky-rocketed after a YouTube video of her bandmates pulling an impromptu prank on her went viral. The clip being shown isn’t only fun to watch but also amusing as you can see the full display of her vocal range and power, going from one key to another key higher. Today, Gigi has amassed 1.58 million YouTube subscribers and 256k followers on Instagram.

Her ticket into fame did not actually come from this clip but from as far as 2016. As previously stated before, Gigi was a contestant in “Tawag ng Tanghalan” a segment of the noontime show “It’s Showtime”. In its first season, the then-20-year old singer dominated a portion of the show’s run, beating and becoming the defending champion for some time.

Gigi Vibes, which comprises Gigi and her band, has come a long way. They’ve had their jamming sessions even before the pandemic struck, setting up gigs here and there. Gigi even live-streamed occasionally in her Facebook account and posted some clips on her YouTube channel. And with the pandemic locking everyone inside, she resumed doing live streams in late June 2020. At first, she was only with her pianist Jon Cruz, but with the succeeding live streams, other bandmates joined in, officially labeling their streams “Gigi Vibes”.

Their early live streams didn’t have many viewers but with their consistency in their schedule and the quality of music that they brought to the table, their audience grew larger with every single stream. They raised funds to support themselves through song requests from the viewers that can be paid through e-commerce apps like G-Cash or PayPal. This was not mandatory but many of the viewers were eager and happy to listen to their requested song.

There were times where Gigi and the band had to take absences due to personal and health reasons, but they soon returned for another season of Gigi Vibes in September 2020.

Now that we have talked about Gigi and her career, let us take a peek at the star herself.

The Filipina performer Gigi was born with the name, Mary Gidget Dela Llana in Calamba, Laguna. On September 24, 1995, which would mean that she is now 25 years old. Aside from her singing career, she also made her acting debut in 2020’s ‘Four Sisters Before the Wedding’. She also works under Rise Artist Studios as a business model.

As her viral prank video exemplifies, she has a very powerful voice and is very versatile. Another feature that you might have noticed about her is that she is very gorgeous. She has both talent and looks, but it would be wrong to say that she is the only one who carries the Gigi Vibes single-handedly. Her very talented and equally versatile bandmates are also unique, entertaining, and very funny. As they have been friends for a long time, their laughs and conversations are very genuine. Their chemistry together makes the viewer feel like they are just jamming with their friends. You can see that they genuinely care and love each other like family as they also enjoy what they’re doing

So, what makes their live streams so appealing?

As I have stated before, Gigi vibes give off a somewhat authentic vibe that makes the audience feel comfortable. Their streams are great for people missing the atmosphere of bars and lounges with acoustic gigs playing in the background. The schedule of their streams also ensures that the setting is somewhere where you can relax and just enjoy the show. The band is also very interactive with their viewers, acknowledging not just the paying requesters but also the general audience of their live streams. Sometimes they go off tangents on a certain topic brought up and the audience can chime in with their comments. The whole set-up truly promotes inclusion towards everybody involved.

A recent development in Gigi Vibes’ social media was on July 15-16, where her Facebook page was temporarily closed down by Facebook due to unknown reasons, but the issue has been resolved after a day of the closure. They’ve also created another Facebook page and YouTube channel with the reason being that their audience is becoming a lot larger recently.

Gigi de Lana not so long ago expressed her enthusiasm for collaborating with Filipino rap icon Gloc-9, seeing him as an authentic artist. Furthermore. She stated that she wanted to be a part of the Sunday musical variety show “ASAP Natin ‘To”, where she already made her appearance as a guest. For the time being, it seems that Gigi is still striving for a much better life, making strides, and working hard to achieve her goals.

*UPDATE: FOR UNKNOWN REASON TO ME HER VIRAL YOUTUBE CHANNEL WITH MORE THAN 1.5 MILLION SUBSCRIBERS AND MILLIONS OF VIEWS WAS TERMINATED AND GONE AS OF THIS WRITING. PLEASE SUPPORT HER NEW CHANNEL BELOW.

I was an ordinary shopper who distrust online shopping as I always believe that something bad is going to happen to my credit card and other personal info needed to open an account. Sharing my address where my family lives and telephone number which I really do not like since there are already too much spam mails and calls coming in offering things I do not even need.

What I knew about Amazon

When I first heard of Amazon, and that was decades ago, what comes to mind is an online shopping websites with lots of annoying ads and pop-ups making you feel that you are getting infected with malware and viruses ready to pounce on unsuspecting shoppers, hehehe. Well it is not really an baseless fact since I know a little about sniffing, coding, phishing and the likes so I am aware of the risks we are exposed to when surfing the internet.

What changed my mind to shop at Amazon

Years later it was really my teenage daughter who reintroduced me to Amazon. I found out that she’s been internet shopping most particularly with Amazon. As I was wary of the net I told her to be careful that our personal information might get compromised. So she gave me her login details and let me check myself, To my surprise, Amazon had gone a long way from their original store and is now considered as one of the biggest online shopping in the world. They have grown so big that their online presence everywhere is surprising. They even have a lot of stock point around the world. Yes, I was really left behind the times. LOL! Checking on their URL I have noticed that they are now using SSL thereby encrypting all the data transfer between the clients and the store. I feel safer now of course and my paranoia completely disappeared when I did not encounter any pop up advertisement. Not even one! It’s time to check out what they have to offer then.

I am basically an ordinary guy and my hobbies nowadays are bonsai making, gardening, lawn mowing and of course internet surfing. I also enjoy fixing the house and tinkling with different electronic gadgets. So I always go around town shopping for my needs. Well I thought it is time for me to try out Amazon since it’s popularity with my family and friends is getting me. Ok, after I logged in in with my daughters’ account I clicked on search and try to find grass seeds for my lawn and there it is, with lots of brands to choose from. Hmmm not bad. As I am in Japan I was thinking it would take a long time to deliver but was surprised to found out that it will be delivered the next day! And it is already late in the afternoon! What more is there was no delivery fee! The price beat my hometown’s Home Center hands down so I am getting a bargain. I tried other products like lawn mowers, fertilizers etc and they were all the same. Wow! No more driving around town hastily choosing products or waiting for stocks to arrive from wherever I have no idea. Who knows maybe they were also ordering them from Amazon. hehehe

After that experience I decided to create my own account and begun ordering anything I need from the smallest to the bulkiest items. The good thing is you get exactly as described and the quality is always topnotch unlike the other online stores I tried who sells cheaper but the quality was way below satisfactory. All said, I highly recommend Amazon products which I know pass their quality control or checked the seller’s credibility before they host them. A good tip is to check the seller standing and if their products received a lot of stars and good customers review, then it should be good. Enough said I give them 5 stars for costumers satisfaction.

For almost a decade back, Cyber Pinoys was changing host looking for a reliable server with a secure connection, best uptime, reliable services and good web support. It was until I found Craserv Domains and Hosting that I was finally able to rest easy and leave it all up to them to keep my sites (I got others) running smoothly. After some time I was forced to quit because my work pushed me out of our office limiting my access to a computer. Now as everything is back to normal and Craserv is willing to provide its top notch services again with its all year round discounted prices.

Craserv Domains and hosting is a well known Domain Name Registrar. They make it so easy and affordable for clients to choose a domain name, sign up for hosting, and start building their online business or personal websites. While known for their domain, email, and shared hosting services, Craserv offers options for virtual and dedicated servers as well. The upgrade process is as seamless as possible.

Craserv is a go-to domain web host for millions of users world-wide for a reason. They maintain their ever-expanding network of users by offering blazing-fast load times and award-winning security and support. They have great hosting deals at very low prices.

What about costumer support?

Customer support has been a focus of the Craserv team as they constantly work to improve. Now, they have an award-winning team of experts on staff, readily available to handle customer support tickets and emails 24 hours a day, seven days a week. Their security monitoring is round-the-clock and they guarantee uptime rates of 99.9% or better. This uptime rate is outstanding in the industry. Their page load speeds are really fast.

So to all of you out there whether you are a beginner or a professional webmaster I strongly recommend my Host for your needs whether it’s for domain name, hosting and SSL. Affordable VPS and servers are also available.

This website is being hosted by Craserv Domains and Hosting .

Sign up and get the desired domain name you deserve before someone else gets it.